The California Department of Technology secures the optical fiber needed to lay 3,000 miles of broadband infrastructure

675,000 underserved Californians would gain access to high-speed internet across the state with new broadband network

SACRAMENTO – Governor Gavin Newsom today announced that California is one step closer to delivering affordable high-speed internet service to communities throughout the state, awarding new contracts that will supply the materials necessary for building 3,000 miles of broadband infrastructure.

The California Department of Technology, as part of the state’s Middle-Mile Broadband Initiative, awarded contracts to two vendors totaling nearly $225 million that will allow the state to purchase enough optical fiber and materials to construct 3,000 miles of the network.

“Delivering broadband to all is essential to California’s success,” said Governor Newsom. “Access to high speed internet can mean the difference between launching a successful career and being without work. Once constructed, this network will be the largest in the world – and our action today will make the promise of broadband for all a reality.”

California is strengthening broadband connections to improve access to education, health services and employment opportunities throughout the state. The Middle-Mile Broadband Initiative is the first step to creating an open-access, middle-mile network that will build infrastructure to bring high-speed broadband service to unserved and underserved communities, regardless of technology used, on equal economic and service terms.

The action today is one part of a comprehensive and long-term approach to tackling the broadband infrastructure deficiencies still impacting rural and low-income communities, bringing the state closer to achieving affordable, high-speed broadband internet service for all communities. Construction on the middle-mile network is expected to be completed by December 2026. 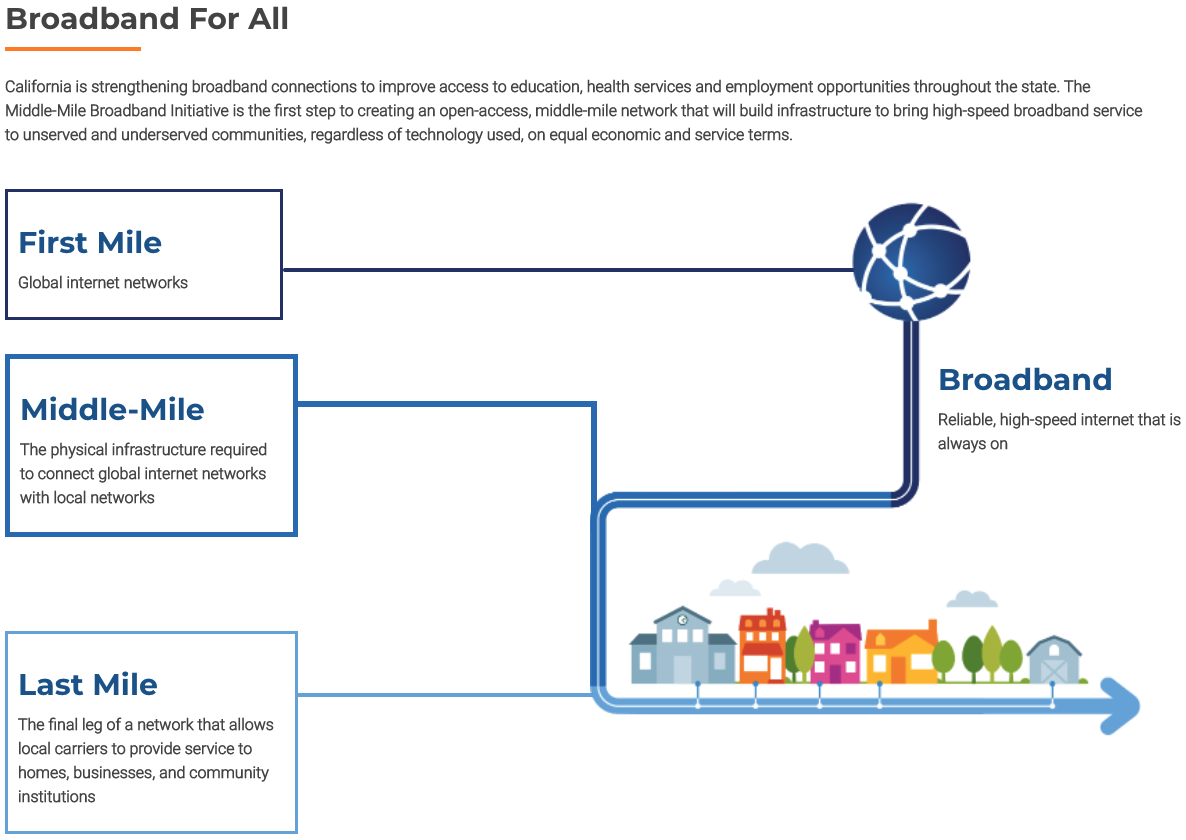 Middle-mile network refers to high-capacity fiber lines that carry large amounts of data at higher speeds over longer distances between local networks. It is the physical infrastructure required to connect global internet networks with local networks and is an essential component of the state’s Broadband for All efforts.

Supply chain issues and nationwide broadband projects have created competition to secure necessary materials. The state’s Invitation For Bid (IFB) was a proactive step to ensure supplies will be available at a pre-negotiated price when they are needed. The state has the ability to add an indefinite amount of materials as needed to complete construction over the next four years.

As a result of the competitive process, the state is guaranteed to have conduit, vaults, optical fiber and construction hardware readily available for the next four years as construction begins in earnest.

Government Operations Secretary Amy Tong said purchasing the material for the network is a critical first step to make sure California has the supplies it needs for construction of the middle-mile network in the coming years.

“This fiber will be the backbone of the middle-mile network, which will bring access to unserved and underserved Californians so they can participate equally in digital society,” Tong said.

Russ Nichols, acting director of the California Department of Technology and chair of the Middle Mile Advisory Committee, said the projects will begin soon.

“With this milestone in place, we can continue our planning with Caltrans to begin installing the fiber as soon as possible,” Nichols said.

Last year, the Governor signed historic legislation allocating $6 billion for achieving Broadband for All, including $3.25 billion for the middle-mile network and this year’s revised budget proposes an additional $1.1 billion to support the project as it moves into construction.

In 2020, the state mobilized companies, business leaders and philanthropists through public-private partnerships to facilitate distance learning at school districts in need across the state. The effort helped connect students lacking high-speed internet or an appropriate computing device at home with donated mobile hotspots, laptops, Chromebooks, tablets and other devices.

Sun May 22 , 2022
A report that tech billionaire Elon Musk paid a private settlement following claims of sexual misconduct from a flight attendant who worked on a private jet in 2016 is unlikely to affect Musk’s deal to buy Twitter, experts in corporate acquisitions said Friday, after Musk’s critics called for him to […]