Practical and affordable, smartphone stabilisers have matured to the point where just about anyone can capture cinema-smooth video clips right from their phone. Zhiyun is a mainstay of the gimbal market, with the latest Smooth Q4 stabiliser representing a culmination of the brand’s latest refinements.

Pulling together some of the best elements of Zhiyun’s entry-level Smooth X and more high-end Smooth 5 stabilisers, the Smooth Q4 features an extending telescopic arm and on-handle mode switching.

Although noticeably pricier than its predecessor, the Smooth Q4 still undercuts DJI’s latest stabiliser offerings by some margin. For budget-conscious content creators, the Zhiyun Smooth Q4 is likely to present a very tempting package indeed.

Zhiyun Smooth Q4 review: What do you get for the money?

You can pick up the standard Zhiyun Q4 Package, which includes the Q4 stabiliser, a fold-out mini tripod base and a USB-A to type-C charging cable for £119. There’s also a Combo Package for £149 which, in addition to the above, includes a magnetic LED fill light, wrist strap and a semi-hard case to keep everything in. 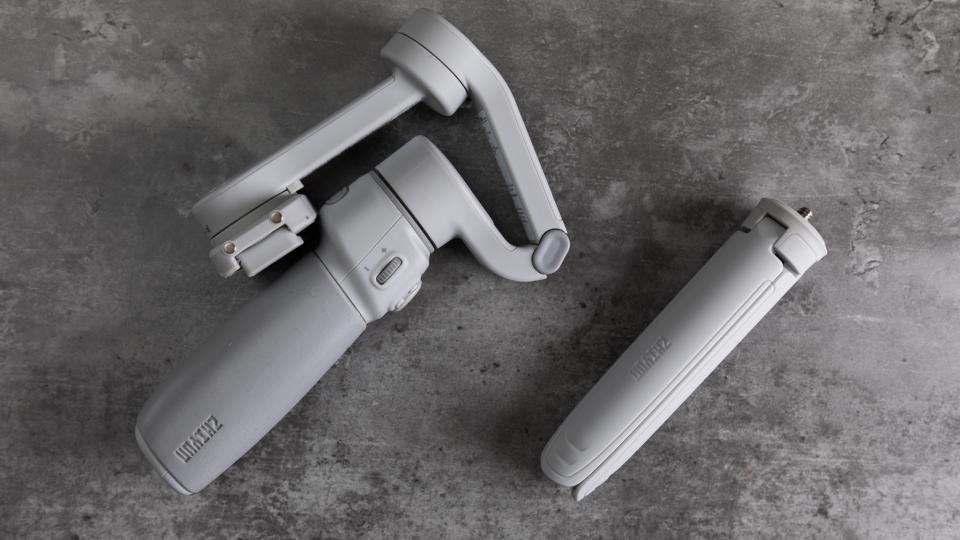 The Q4 incorporates a folding design that’s useful for compact storage while not in use and a spring-loaded fold-out phone clamp to further reduce its overall footprint. On the handle, you’ll find a joystick, power button, trigger button and a dedicated recording button. There’s also a mode-switching button along with a set of LED lights that indicate the currently selected mode (more on modes later).

A standard 1/4in tripod thread in the base of the unit allows you to attach the included mini tripod or to affix the Q4 to any standard tripod. There’s also a USB type-C port which is used for charging. Zhiyun advertises that the Q4 can manage up to 15 hours of use off of a full charge. 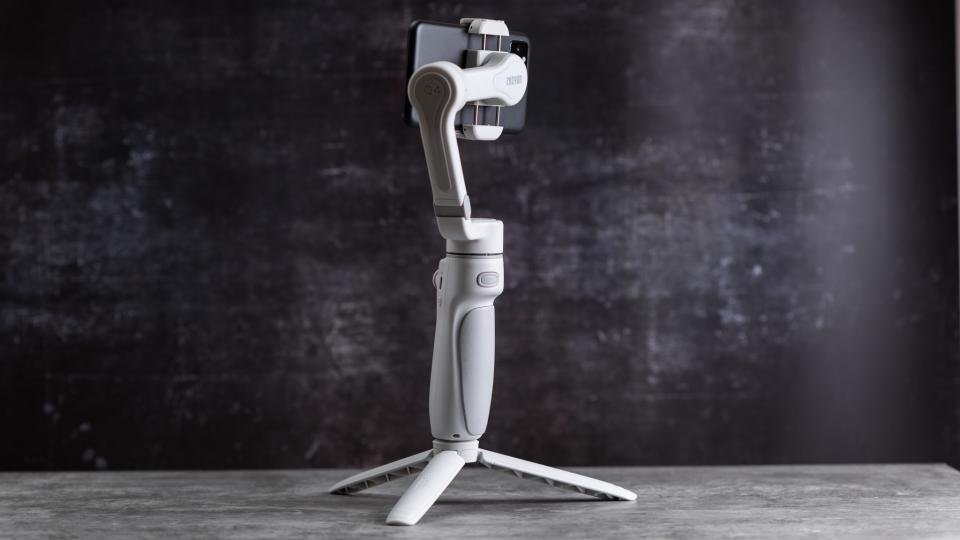 The Smooth Q4 pairs with Zhiyun’s ZY Cami app, available for free for both Android and Apple devices and this allows the device to track moving subjects, create stitched panoramic images and produce programmed time lapses. While you need to use the Q4 with Zhiyun’s app to make full use of the device’s physical buttons, the stabiliser can be used on its own.

Although visually similar to its predecessor, the Q4 has received a number of fairly significant updates. The main arm of the stabiliser is now extendable, for instance. The telescopic mechanism adds up to 21cm of additional reach to its base 22cm height, allowing the phone to be positioned further away for more flattering selfies, reach higher and lower camera angles as well as help dampen camera shake while filming handheld. 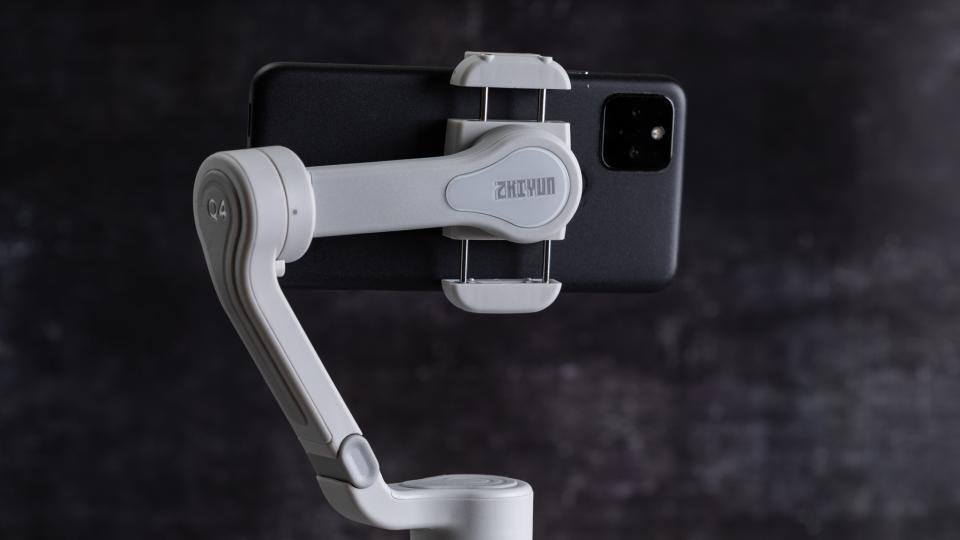 The device’s overall physical design has also been refined. The Q4 folds down a little more compactly than before and there’s a new fold-out smartphone clamp as well.

A fairly major addition is the inclusion of a new physical mode button along with a set of LED indicator lights. This enables the user to switch between the gimbal’s various behavioural modes straight from the handle, cutting out the need to hop into Zhiyun’s smartphone app.

Most importantly, the Smooth Q4 lives up to its namesake – it’s very smooth. While recording video, the Q4 handles movement in a very fluid way. The stabiliser adds a gliding feel to stationary camera moves and can really tame the jerkiness of moving footage. While some gimbals can feel a little floaty and detached, the Q4 feels active and responsive. There are limits to all stabilisers – run over uneven ground or flail your arms around and you’re going to get shaky footage – but if you’re deliberate in your movements then the Q4 works very nicely. 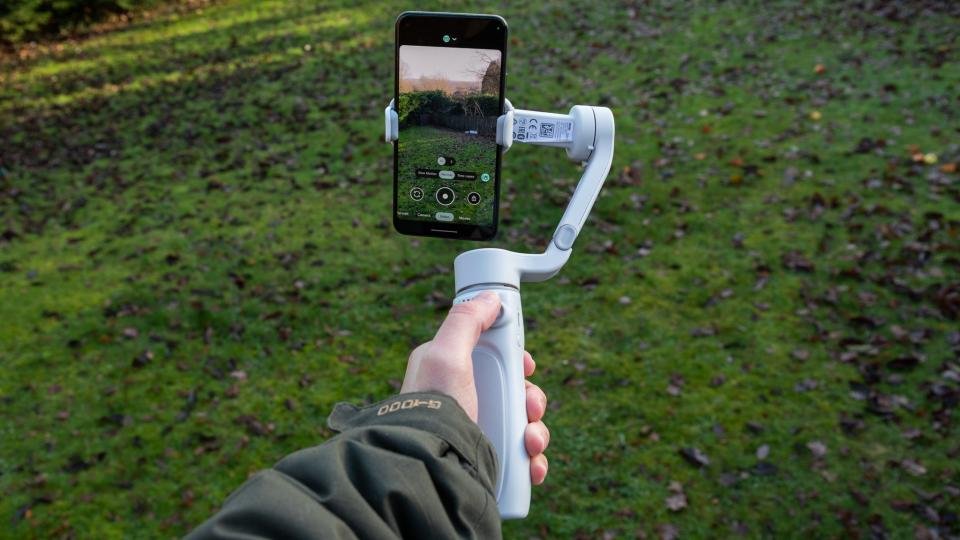 The device’s physical buttons keep a lot of controls within easy reach. The joystick works smoothly and can quickly adjust the angle of your phone. The trigger button on the back can be used to switch between landscape and portrait orientation modes and there’s an on-handle recording button which works with the ZY Cami app.

In my opinion, however, the inclusion of an on-handle mode button is the best addition to the Q Smooth line. While it may seem like a rather small thing, this button enables you to dictate the behaviour of the gimbal without having to faff about in the Q4’s companion app. In fact, it allows you to use the Q4 completely independent of the app if you’d prefer. While my default setting was to leave it in the point of view (POV) mode, with a quick tap you can switch between pan follow, lock, follow, vortex and go modes.

Having reviewed a number of smartphone stabilisers at this point I can say that my overall experience with gimbal apps has been, well, mixed. Being able to side-step the companion app completely and stay solely within my recording app of choice, be it my phone’s native camera app or otherwise, is a huge plus.

That being said, for casual content creation, the Zhiyun app does bring a few useful tools to the table. It’s not entirely free of issues – more on that later – but it can be used to throw together sweeping time-lapses, apply subject tracking to your videos and record hyper-lapse.

My favourite feature, however, is the programmable time-lapse mode. Here you can set start, end and even intermediate points and the gimbal will glide through them whilst recording a timelapse. This is a trick that’s essentially impossible to recreate without a stabiliser and results in some rather striking clips. 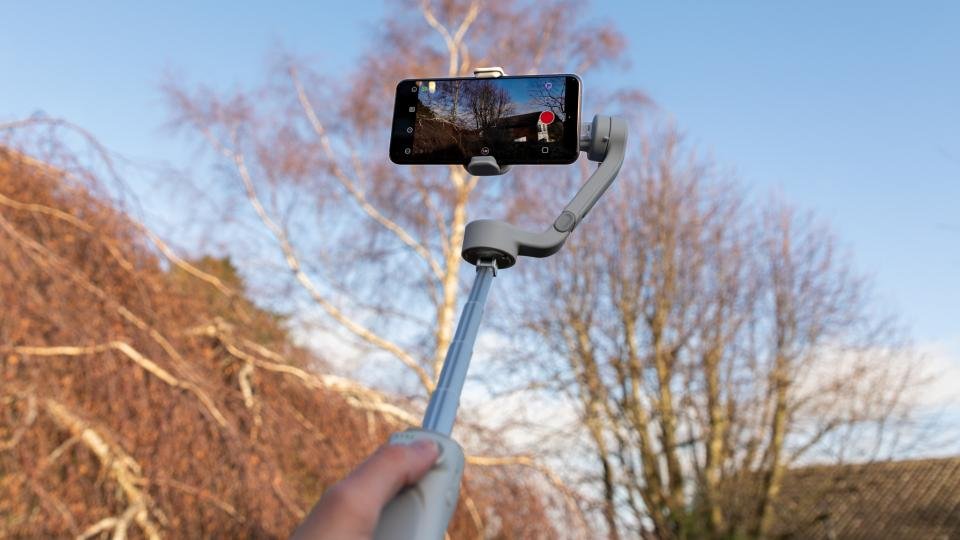 The Smooth Q4’s overall design is also nicely refined. The folding mechanism feels solid and is satisfying to use. The extendable arm also adds some extra flexibility and allows the Q4 to take on more of a selfie stick role when required.

Zhiyun Smooth Q4 review: How could it be better?

One design choice does, however, stand out as a little strange. A small knurled wheel is used to zoom in and out while using the Zhiyun app. This arrangement is rather frustrating as it’s incredibly difficult to maintain a smooth zoom movement while thumbing at the wheel. The Smooth Q3 used a simple slider and in my view, this worked better. 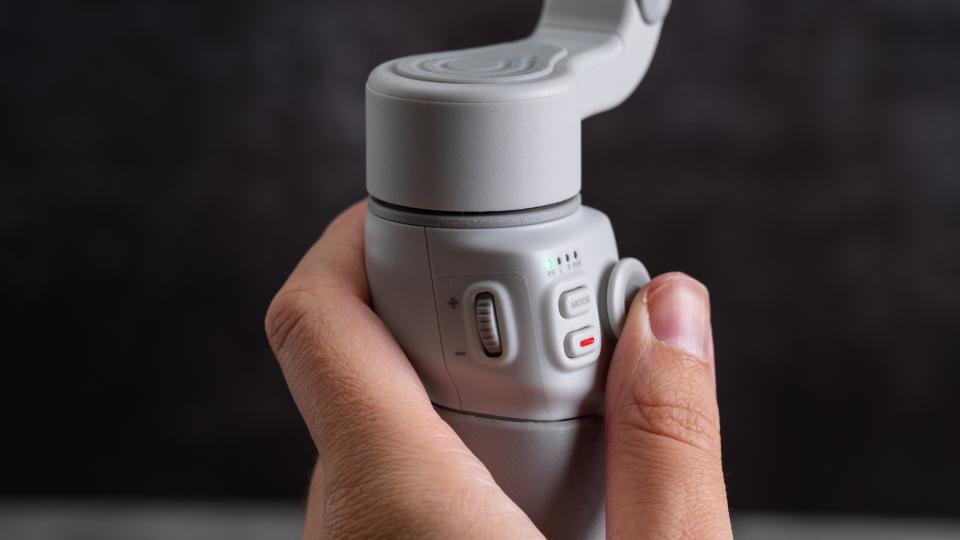 There are also some restrictions to the stabiliser’s range of motion when compared to larger gimbals. The way the gimbal’s motors are arranged means that you can’t very easily get low shots without physically getting down to the ground or inverting the handle. This is somewhat irksome considering the new extending arm really invites more creative angles. It’s worth pointing out that this limitation isn’t exclusive to the Q4 but it is something to be aware of if you’re coming from a larger camera stabiliser system.

While Zhiyun’s ZY Cami app has improved over the years, it’s still not exactly issue-free. On several occasions, I ran into issues where panorama images glitched out, only saving part of the stitched image. Bizarrely, I also encountered a bug where moving time-lapses would sometimes rotate in the opposite direction to what I had selected. Additionally, if you hop out of the ZY Cami app to use a different app, it will sometimes lose connection and won’t connect again until you’ve closed the app and restarted the stabiliser. Overall it feels like it still needs a fair bit of polish. 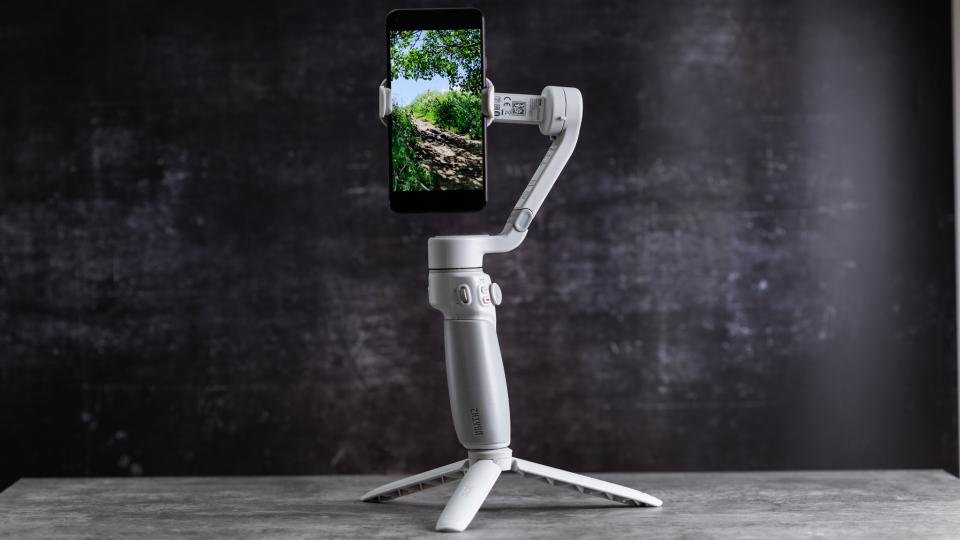 Straightforward recording using the ZY Cami app is also pretty basic, especially on the Android version where you’re limited to exposure compensation adjustments rather than manual settings. Recordings within the app often come out rather mushy and compressed and so, unless you’re using the app for one of its creative features, you’re usually better off recording video with a different app. You may lose the functionality of some of the onboard buttons when doing this but the overall quality will be much improved.

It’s also worth noting that the Smooth Q4 is considerably more expensive than its predecessor. While at £89 the Smooth Q3 could be considered a solid budget option, at £119 the Q4 is creeping toward the premium end of the market.

Zhiyun Smooth Q4 review: Should you buy it?

The Zhiyun Smooth Q4 is compact, easy to use and capable of producing wonderfully smooth clips. While the more high-end Smooth 5 with its enhanced offering of physical buttons and improved range of motion may offer an edge to more demanding users, I feel fairly confident in saying that the Smooth Q4 will present the better all-around option for most people.

Zhiyun’s ZY Cami app still has a little way to go and it’s because of this that it falls just a little short of a wholehearted recommendation. While the device can be operated fully independent of the app, it does feel somewhat incomplete without it.

Ultimately, however, the Zhiyun Smooth Q4 is the firm’s best smartphone stabiliser to date. While not quite the bargain that the Q3 was, the Smooth Q4 is still a solid budget alternative to DJI’s increasingly expensive OM stabilisers.

You can buy a portable quantum computer for under $9K

Tue Dec 20 , 2022
Most PC gamers lucky enough to be upgrading at the moment have their eyes pinned on the new hot kit. They’re out there scoping for an Nvidia 4090 (opens in new tab) or AMD’s RX7900 range (opens in new tab). But maybe they’re thinking a little too simple, a bit […]